The newly launched Toyota Yaris Cross has picked up its first significant honour, being name Best Small Crossover in the 2022 UK Car of the Year Awards. Having won its category, it is now in contention for the overall car of the year title, which will be announced on 8 March.

The hybrid electric Yaris Cross impressed the awards’ judges, a group of the UK’s most experienced automotive journalists and commentators. Each member of the panel put the car through its paces, prompting high praise.

Alex Grant remarked how the car “reaps the rewards” of Toyota’s long experience in hybrid technology, being “competitively priced” compared to conventional petrol and diesel models and “offering some of the highest real-world efficiency short of a plug-in hybrid.”

In similar spirit, Tim Pitt noted how the hybrid system is “particularly impressive around town, where the majority of driving is EV-only.” Alex Robbins praised the “accessible eco-friendly motoring” and highlighted Toyota’s “smashing” warranty – up to 10 years/100,000 miles with the Toyota Relax programme.

Quality was the key for Tom Sharpe, who said: “Offering more space than anything wearing a Yaris badge has the right to, and trim quality approaching that of its Lexus premium sister brand, the Yaris Cross should be an instant hit with buyers.”

Yaris Cross is an all-new model which brings together Toyota’s established strengths in small car and SUV design. It is an extension of the new Yaris family, built on the same GA-B platform as the hatchback model, and is powered by Toyota’s fourth generation hybrid electric technology. It achieves official fuel economy (WLTP combined cycle) of 54.62 to 64.2mpg in versions with front-wheel drive. Notably, Yaris Cross recently set the best figure ever achieved in What Car? magazine’s True MPG testing – surpassing the record previously held by its sister hatchback model. As an authentic SUV, Yaris Cross is also available with Toyota’s intelligent all-wheel drive system.

We took the the New Toyota Yaris Cross for a spin and put the hyrbid engine to the test in a few different driving enviroments. First, we started in Manchester city centre where the benefit of the EV mode can be seen at its best. Then we headed out into the countryside around Rochdale and onto rougher ground to showcase the Toyota Yaris Cross' off-road capabilities and finally, we headed back to Manchester via the motorway. We managed to average 56.9mpg for our test drive of all 3 types of routes combined. 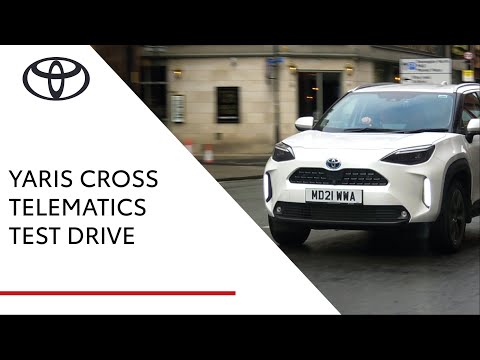 Company Info
Back to Top