The ŠKODA FABIA: Best-in-class for aerodynamics ​

The fourth-generation ŠKODA FABIA comes with aerodynamics that are more sophisticated than ever before – and unmatched by any competitor model in its class. Sporting an emotive and dynamic design, the all-new FABIA achieves a drag coefficient of just cd = 0.28 – considerably undercutting its predecessor (cd = 0.32). This outstanding aerodynamic efficiency is the result of numerous small-scale enhancements, such as clever cooling shutters with active slats, which help reduce fuel consumption and emissions. The aerodynamics development for the FABIA saw ŠKODA invest over 3,000 CFD simulations, with the results then verified and fine-tuned during subsequent test drives.

Vít Hubáček, responsible for the aerodynamics development of the ŠKODA FABIA, says, “Even though the all-new FABIA is larger than its predecessor – its frontal area has increased by around three per cent – we have reduced its drag coefficient by almost ten per cent. This alone cuts CO₂ emissions by almost three grams per kilometre in the WLTP test cycle. To achieve this, we performed more than 3,000 aerodynamic tests, around 80 per cent virtually, using CFD simulations running on a supercomputer. An ordinary PC would have taken more than 2,000 years to perform the same job.”

The result of the aerodynamics development for the all-new ŠKODA FABIA is a drag coefficient of cd = 0.28, with the fourth generation considerably undercutting its immediate predecessor (cd = 0.32) while at the same time establishing a new benchmark for the small car segment. The all-new FABIA’s outstanding aerodynamics make a significant contribution to the reduction in fuel consumption and emissions. The aerodynamics development saw collaborations between experts from several departments, such as designers, aeroacoustics specialists as well as engineers responsible for the car’s body, underbody and engines. Moreover, ŠKODA cleverly combined virtual tests using computer simulations with physical test drives, with the latter used predominantly to verify and confirm the results of the simulations.

Tens of thousands of supercomputer hours
The ŠKODA AUTO Aerodynamics department worked largely in virtual space during the development of the all-new FABIA. As optimising vehicle aerodynamics is an extremely demanding task and even a minute change can give rise to numerous consequences in other areas, the engineers used supercomputers in order to test as many variations as possible by way of CFD (Computational Fluid Dynamics) simulations. Over the course of around three and a half years, they performed over 3,000 of these fluid dynamics simulations, which required tens of thousands of hours of computing time. The role of aerodynamics in the automotive industry has grown considerably in importance over recent years, and this trend will continue as emissions regulations become ever more stringent. ŠKODA AUTO has taken this to heart and significantly increased its staff capacities and competence in this area. While twenty years ago, just three aerodynamics specialists were responsible for the entirety of the ŠKODA AUTO output, there are now three for the FABIA alone.

Cooling shutters lower fuel consumption at 120 km/h by up to 0.2 litres per 100 kilometres
Numerous individual measures have helped the all-new ŠKODA FABIA achieve its best-in-class aerodynamics. One important factor are the innovative cooling shutters in the lower air intake, pioneered by ŠKODA in the FABIA as a first in this vehicle class. When little cooling is required, the active slats will close, thus improving aerodynamics. At a constant speed of 120 km/h, this enables fuel savings of up to 0.2 l/100 km. The FABIA will then also emit up to five grams less CO₂ per kilometre. When cooling requirements are high, or during brief stops, the system will open the slats to allow maximum air flow. In addition, there are numerous components that contribute to minimising drag. The vehicle front features openings in the front bumper known as Air Curtains, which direct the air flow in a highly controlled manner past the body’s side panels and wheel arches, for optimal aerodynamic efficiency. The air flow underneath the car is now optimised by twelve rather than the previous three underbody panels, which combine with the long rear spoiler and side finlets to reduce drag and turbulence at the rear of the car. The shape of the exterior mirrors directs the air straight towards the separation edges on the tail lights. As the wheels alone are responsible for generating around 25 per cent of a car’s air resistance, ŠKODA is now, in another first for the FABIA, introducing special plastic inserts that render its alloy wheels more aerodynamic 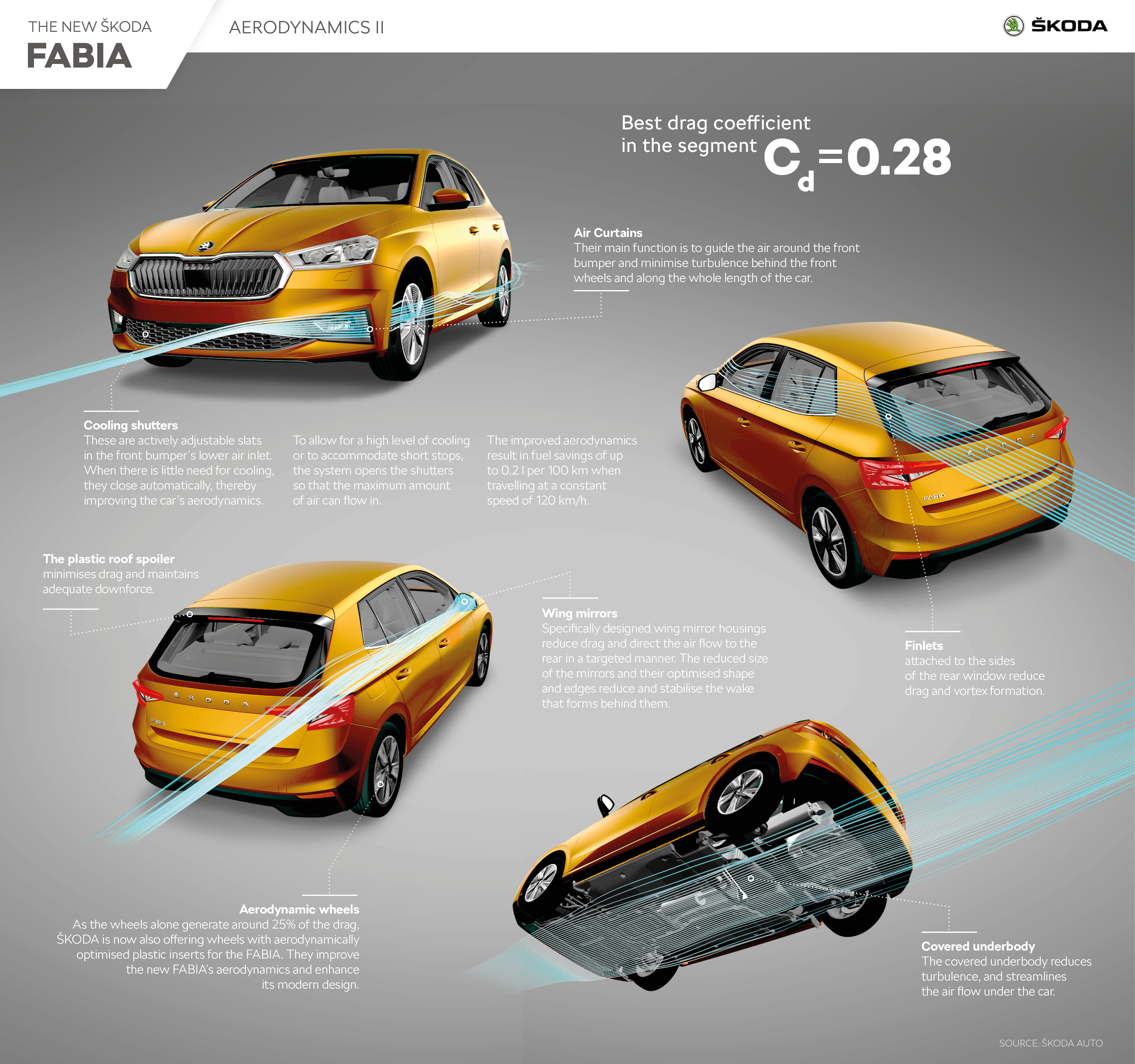